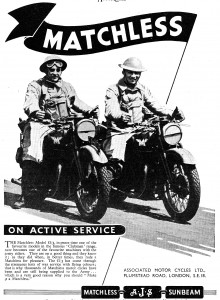 The process of purchasing vehicles and equipment for the armed forces involved lengthy selection and testing to confirm that the required performance criteria was met. Quantities were then ordered by the War Office against that specification and for each order a ‘Contract’ was issued. Between July 1939 and the end of hostilities on 2nd September 1945 some 20 Matchless contracts were awarded. Over 80,000 machines (18,300 G3-WO and 63,600 G3L) were delivered to the services with most of these going to the Army via British based Ordinance Depots.

Contract numbers are not consecutive. For example: C4068 was the first G3-WO contract, C9506 the first G3L and C6150 the final wartime contract.

‘British Forces Motorcycles 1925-45’ (ISBN 978-0750944519 – 2nd edition 2006) is recommended reading. Authors Chris Orchard and Steve Maddon have used pains-taking research and extensive personal knowledge to produce one of the most definitive references available for these machines. The book includes an appendix listing each contract for each manufacturer in chronological order and provides contract dates as well as lists of Army census numbers allocated to each contract.

For the majority of Matchless contracts support literature was issued comprising of a ‘Spares List’ (SL) and an ‘Instruction Book – Driving and Adjustment Instructions’ (for contracts up to and including C11102) and then separate ‘Maintenance Manual and Instruction Book’ plus ‘Drivers Handbook’ from C12632/3. SPLs for the G3L model are illustrated with line drawings of most parts or assemblies. These illustrations should not be regarded as being definitive as they were not always updated from one contract SL to the next. A list of illustration changes between one SL and that preceding can be viewed here: Parts list illustration changes

A list of titles and known edition numbers for these publications can be viewed here: Contract-support-literature

Many of these titles are freely available from here: AJS and Matchless Archives

If you want copies of any titles listed under Contract Support Literature which are not in the archives please contact us and we’ll try and help: info@matchlesswd.co.uk

The following illustrations are examples of contract support literature. 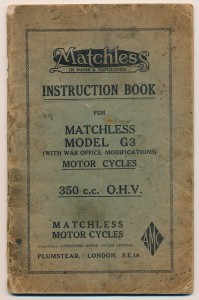 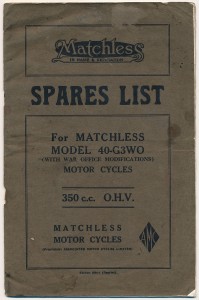 G3L Instruction Book (Driving and Adjustment Instructions) for c9506 and 9841 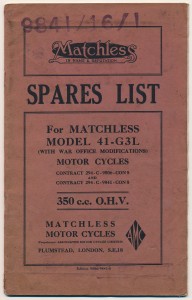 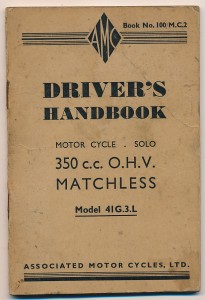 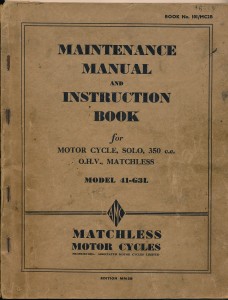 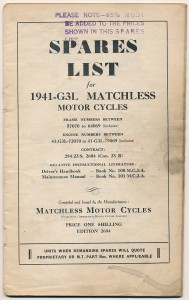 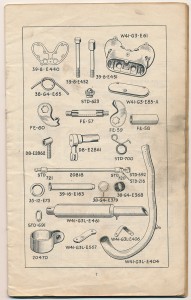 Only the Spares Lists for the G3L were illustrated