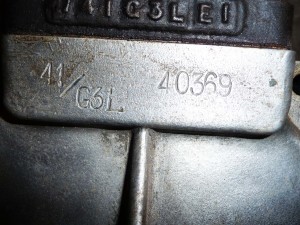 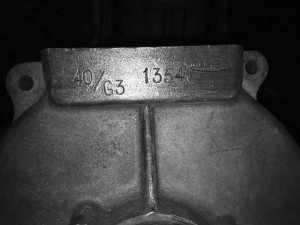 Certain engine numbers bore the pre-fix 40/G3R or 41/G3R. The meaning of most other additions to the engine number are detailed but the precise reason for G3R numbering is not mentioned in any service literature (to our knowledge). All currently recorded G3R numbers are between 14990-22900. These numbers are from three consecutive contracts 7183, 8078 and 8934 and are thus G3-WO machines produced from May to Oct 1940. 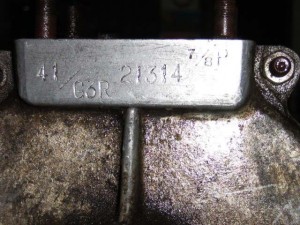 All known 40/G3R numbers are from contracts 7183 and 8078. All known 41/G3R numbers are from contract 8934. These three contracts overlapped both with each other and with the start of G3L production. The SPL for contract 8934 states the model number as being 41-G3WO. This change in model number from 40-G3WO to 41-G3WO is not mentioned elsewhere in the literature. None of the service literature reveals any major specification changes which might have made necessary the issue of a new engine number pre-fix. Additionally; the first part numbers prefixed 41 did not appear until contract 8934 (N.B. Many part numbers have a prefix which indicates the year when such part was introduced). 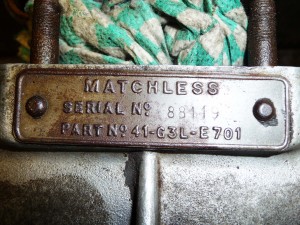 Service replacement engine with pressed-steel plate. In this case the number 88119 is from a sequence missing from between the last two G3L contracts c4555 and c6150.

Service replacement engines were introduced by Matchless in May 1942. Complete engines were then given the part number 41-G3L-E701. These engines had a pressed-steel plate where the engine number would normally have been stamped on the primary side crankcase. It is not normal to find a number stamped beneath this plate. There are examples where the plate has been removed and the original engine number stamped on, the absence of the plate being marked by the two fixing holes. Sometimes the original engine number was stamped on the plate.

C8934 was also the contract where the increased diameter ⅞ ” crankpin was first fitted to some machines.  As this change occurred part way through the contract on some crankcases ⅞ or ⅞ P may be stamped denoting the use of this crankpin over the previous standard of ¾ “.

You may also find a capital ’A’ or ‘B’ denoting Amal or Bowden controls. 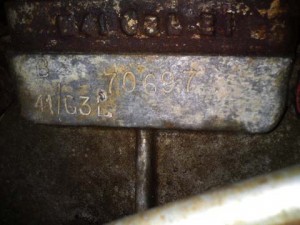 Note the B in the top left corner (courtesy Cris Tsagozis)

The presence of B/W usually denotes Base Workshops. 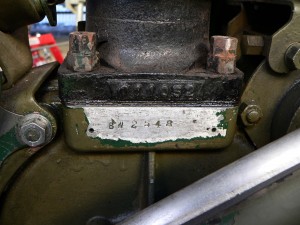 Here the steel plate identifying this as a service replacement engine has been removed and a base workshops number which may be the number of the engine it replaced or perhaps more likely the date. 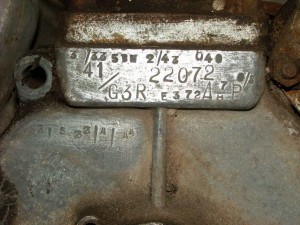 Almost a ‘full house’ with this number: G3R 7/8P A B/W… someone really was keen with the stamps !

After the war machines entered into other ownership – both local military services and civilian. This occasioned other markings to be added such these … 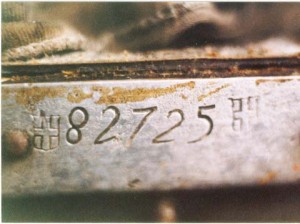 Post-war number from Savoy (Italy). Note the stud from the now removed steel plate indicating this as being a replacement engine. The number was probably added when ex-WD machines were sold after the war it being required to allow the machine to be registered for civilian use. 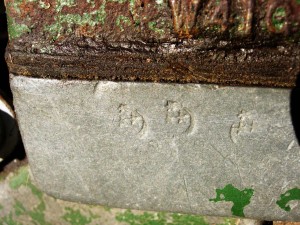 The ‘3 stars and crescent moon’ was the symbol of the Royal House of Egypt. Indicating that this G3-WO was taken into local military / police use prior to entering the civilian market. 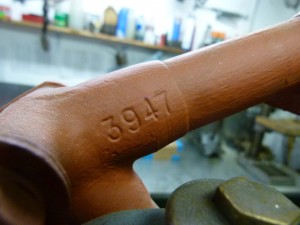 Click here for SPL contract detail This information has been compiled and verified using a number of sources. Acknowledgment is again given to ‘British Forces Motorcycles 1925-45’ (ISBN 978-0750944519 – 2nd edition 2006) which we thoroughly  recommend you to read. Authors Chris Orchard and Steve Maddon have used pains-taking research to compile a list of contracts for each manufacturer in chronological order. 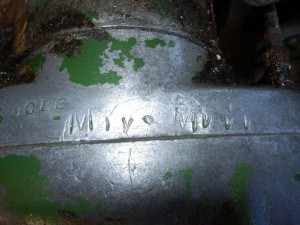 This gearbox number is from a G3-WO (hence it is CPB and not CPBL). If you look carefully you can still see the original number partially obliterated by the Arabic script

Burman gearboxes were numbered either 8CPB for the G3-WO or 8CPBL for the G3L. CP denotes the type of gearbox. B is an anachronism from the pre-war period indicating the chain line was suitable for ‘balloon’ tyres. L denotes the lowered first and second gear ratios as applied to the G3L. The gearbox number is found on inner cover above the kick starter.